In a recent post I opined about “what makes a foodie?” and concluded that it is usually someone who has a passion for good food and enjoying life. Foodies can be anyone from students, to food professionals to politicians! One person I have known for a long time through work and who I know to be very passionate about food and wine and entertainment in Canberra is Andrew Barr, who also happens to be the ACT Deputy Chief Minister. As a busy politician Andrew often doesn’t have the time to pursue all his passions and is often served food he hasn’t ordered, but he only ever seems to have good things to say about the food and entertainment scene in and around Canberra.

Here’s a photo of him recently enjoying a guest appearance next to a world-famous Italian Chef at Canberra’s Capital Region Farmer’s Market. 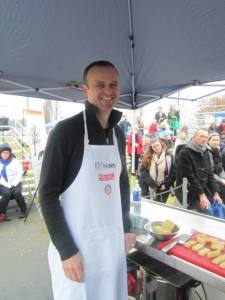 So Andrew, unlike previous foodies you probably don’t need to tell me much about yourself. Because you’re the Deputy Chief Minister I think you may be the first Canberra Foodie I have interviewed who has their own Wikipedia page and Personal Website with a very detailed bio!

Where do you live?  Dickson

How long have you been blogging?  7 years of social media addiction

Can we take a peek at your home screen? 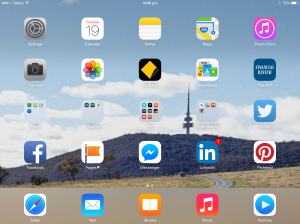 What’s the first thing online you check each morning?  Email and social

When you can find time to sample them, which are your favourite Canberra restaurants? Monster, Morks, Taze

I have to ask you a question about music where the answer is NOT The Rolling Stones! What are favourite albums of 2014 (so far)?  Turn Blue – The Black Keys and Built on Glass – Chet Faker

Favourite film of 2014 (so far)?  The Grand Budapest Hotel

Here are some culinary highlights from our Deputy Chief Minister’s twitter feed:

#QATA13 off to a great start with some fantastic #CBR wines from #ShawEstate on the menu tonight pic.twitter.com/ITregtz8mg

And here is his recent announcement regarding the new “Westside” pop-up project in West basin, which will feature live entertainment, streetfood and pop-up bars. It’s scheduled to kick off at the same time as Floriade in just over a month!