This story originally appeared as an article in the RiotACT.

Canberra is without doubt the most progressive city in Australia. Our unique exposure to politics, national institutions, international embassies and the best public education system in Australia means we not only abhor bigotry and intolerance, but we know how to recognise and congratulate those taking the piss out of it as well. We quickly understood and embraced the poetic hilarity and irony of the Halal Snack Pack craze sweeping kebab shops across Australia, particularly in Sydney and Melbourne. Those of you who enjoy food and humour (who doesn’t) and have yet to join the Facebook Group “The Halal Snack Pack Appreciation Society” (HSPAP) need to sort yourselves out.

When I first joined the HSPAP around March I spent several hours admiring the THOUSANDS of posts of reviews and pictures of HSPs and halal-related cheekiness from around Australia, some of which were absolutely hilarious. The HSPAS quickly becomes a media phenomenon and has now grown to over 175,000 members. It is impossible to keep up with all the posts, let alone all the alerts every single time a friend likes or shares something HSP-related. I’ve learnt the best way to keep up with Canberra-specific HSP posts is to use the search field and look for anything that mentions Canberra. Which brings me to my next point. Upon sharing our HSPAS discoveries and joys my friend Dan and I decided to try and find one in Canberra. There had been a few suggestions thrown about and a few of Canberra’s more enterprising kebab shops had already jumped on the bandwagon. We decided though, like all aspiring HSP connoisseurs, that our local favourite kebab shop would have to be our first point of call. Now, Turkish Halal Pide House in Yarralumla already had a pretty awesome reputation for pide and kebabs – surely they would be serving HSPs now, along with what seemed to be most kebab shops in Australia? We were very pessimistic when we arrived one afternoon and saw clearly that it wasn’t on the menu. I asked them “excuse me, do you sell Halal Snack packs?” The response was a loud laugh “sure mate, have a seat and we’ll put one together for you”. So Dan and I both enjoyed our first Canberra HSP. And it was good. Very good. 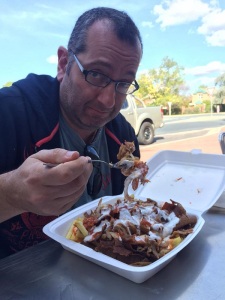 For the purposes of this story, I have returned to what is, in my humble opinion, the best kebab shop in Canberra, to see how their HSP sales are progressing. I spoke with owner and chef Ugur Kocuk, seen below masterfully shaving off kebab meet from his lamb rotisserie.

This is Ugur from #TurkishHalalPideHouse in #Yarralumla #Canberra & he is a master with #Turkish #food! #HSP pic.twitter.com/kBiTy0CRuV

Ugur explained HSPs sales were still growing since we first visited him in March and he was constantly amazed at how popular this particular meal had become. And now HSP’s are definitely listed on the menu in the shop!

Since it began trading in 2003 Ugur’s Turkish Restaurant prided itself on many aspects of the food they produced, and the same professional desire for excellence showed in the way he prepared the humble HSP. And the regular custom and word of mouth did the rest. The line into this shop is often out the door at lunchtime and during the evening dinner rush. They open seven days a week from 9am until about 8pm and there is a constant trade, including many people who do not live in the local area but know how good it is and make the journey for the food.

Apart from HSPs, Ugur’s business is growing to meet the increasing demand for offsite (i.e. delivered) catering. I asked him how far he would cater and he explained how he had provided all the food for two recent weddings in Bungendore! His online menu is here and you can order over the phone as well!

And you can see from the tweet below he has many fans in and out of Canberra!

You're not the only one @Antipaganda who thinks Yarralumla #kebabs are the best in #Canberra 😉 pic.twitter.com/jYsgQD7pop

I asked Ugur to explain some of the reasons why his HSPs tasted better than those at other kebab shops in Canberra. I was particularly impressed when he explained how he sometimes used TWO layers of cheese (one above the chips and another between the layers of meat). He also explained how he bought the best quality chips and meat for his rotisserie and that a few other establishments cut corners on this front to save a few dollars but the taste was very different. But the killer punch that makes his HSP far superior to so many others is the home-made (with a secret recipe) garlic sauce. All Ugur would reveal to me was that it contained mint, garlic and yoghurt! His team also constantly bake their own bread, including their own kebab bread, which they made by hand each day.

Anyway – no HSP review would be complete without following the standard explanation in accordance with the HSPAP rules, so here goes:

Meat 10/10 Beautiful lamb and chicken, eaten together, like Allah (the word for God in Arabic) intended.

Sauce 10/10 – the holy trinity (bbq/chilli/garlic sauces) is even holier with home-made garlic sauce.

Packaging 10/10 – solid styrofoam. None of that hippy recyclable cardboard that is creeping into the HSP universe (just being cheeky here, cardboard is ok, bloody hippies).

I should also explain that much of the credit for fostering and promoting the HSP phenomenon across Australia (and now, increasingly, across the world) was the early adoption of Senator Sam Dastyari as the informal patron of HSPs, or “minister for HSPs” as he is occasionally referred to on the HSPAS pages. Sam not only famously spoke about HSPs in parliament but also appears in numerous videos explaining what they are and how they are made and how to avoid being called a “Haram Dingo“. Most recently, following a public controversy over a declared gift from a Chinese donor, Sam resigned from the front bench of the Labor Party and was immediately memorialised by his HSP fans, including this author with the now famous “Put Out Your <insert appropriate silly object>” meme all over social media.

Recently I was near Woden for a lunchtime appointment so decided to check out Black Rock Turkish in Weston Creek. Couldn’t resist jumping on the #PutOutYourHSPs bandwagon at the same time.

OK, I know not everyone will agree with my praise for Yarralumla and its Turkish food. Also, some people don’t like waiting in lines. You can reduce your waiting time for kebab orders by calling in your order before you arrive, or even using the clever “fill in your kebab order and name here” instructions to the right of the ordering counter.

I also enjoy the Pide shop in Charnwood on a regular basis, as it’s much closer to home! In fact, Kebab shops are a bit like local grocers, butchers or local mechanics – people are so happy to have one that they always think their local one is better than all the others.  Now, you may think your local kebab shop does better HSPs? tell us why and show us a picture, and don’t be afraid to share it on the HSPAS facebook page as well!

The Yarralumla Pide House has a line up a long way out the door! Is it really that good? pic.twitter.com/oWvCN8NhVX

Of course it is Jolene!

Elias (aka CBRfoodie) Recommends: try to avoid the obvious lunch and dinner rushes and enjoy taking your time eating and watching the serious variety of people coming and going and sharing delicious Turkish food.

Elias Hallaj (aka CBRfoodie) is a part-time food blogger and full-time political staffer who has joined RiotACT as a regular contributor. All opinions are his own. If you have any tips or feedback you can find him on Twitter @CBRfoodie.