Dr Gary Lum is a well-known Canberra foodie to anyone on Twitter. As well as being an accomplished cook and social media practitioner, Gary is a great ambassador for our home town, despite the fact that his favourite NRL team are the Broncos …well, he was originally from Queensland! 🙂

I love Gary’s blog and it was great to read this page and learn more about him (the interview in the Canberra Times wasn’t satisfying enough!). I hope he always finds the time to keep up his prolific writing and cooking. I think he’s a great role model for any Canberra men who, who like me, want to improve themselves (physically and intellectually).

Who are you Gary?  I’m a Brisbane boy in love with Darwin and living in Canberra. I grew up in Brisbane and completed my medical and specialty training there. The first consultant job I had was running territory-wide pathology services in the NT based at the Royal Darwin Hospital. I was there from 1996 until 2007. During that time I learnt a lot about medical management and spent some time outside my comfort zone managing the Royal Darwin Hospital. It was in 2002 that I did a seven month stint and bang in the middle of it terrorists struck in Bali. Along with the entire team at the hospital we went about receiving, resuscitating and then relaying on burns patients around the country. You can read my take on it at http://yummylummy.com/2012/10/12/the-2002-bali-bombings-my-experience-and-my-memories/ In 2007 I took up a position as a branch head in Australian Government to continue my career in health emergency management.

My love affair with food was ordained when I was born into a Chinese family. On my Mum’s side we’re fifth generation Australian but the only non-Chinese part was an Irish great great grand mother. My mother is a fabulous cook and she’s also a domestic science teacher. She taught me and my younger brothers the basics and we’ve never looked back. My father is also a good cook so growing up I was surrounded by excellent role models for cooking. While living in Darwin my eating habits became quite poor and my exercise routine consisted of walking to my car. At my peak I reached 100 kg which for a 170 cm tall bloke is obese. After reading various books and thinking about what I wanted to achieve I elected to go down the low carbohydrate route. As a medical practitioner I’m aware of the controversy and the risks. For me though, it helped me shed nearly 30 kg in a few months and maintain a weight at about 75 kg for some years. It got me into a position where I could exercise twice a day and keep trim. When I arrived in Canberra I started putting on weight again and this year returned to the low carbohydrate way of living. I had peaked to 82 kg and didn’t want to buy new clothes. I’ve quickly shed 6 kg and feel a lot better.

Where do you live?  I live in Belconnen near Lake Ginninderra.

How long have you been blogging?  I started the blog in August 2010 after exploring various social media platforms beginning that year. Having a blog seemed like a natural extension to being on twitter and tumblr.

Other hobbies?  My hobbies are cooking, eating and photographing food. I’ve always enjoyed photography and in my clinical career collected a large collection of clinical images from patients with severe wound infections.

Apple or Android?  Before smart phones I was a Diehard Windows PC man. I laughed at Mac users. In about 2008 though my experience with Windows had reached a nadir. How could Bill Gates let me down? I bought a MacBook and haven’t looked back. When smart phones became available I naturally bought an iPhone and then an iPad. For personal use I am exclusively Apple. I have no control what I use at work. That said, I love my work BlackBerry. It is simply the best tool for texting and writing e-mails on a handheld device. All that said, I have no criticism of android products. I’ve just never used them. The Apple products satisfy my needs.

Car/Bus/Bike?  I love cars. I love big heavy thick metal plated cars, I love V8 engines and I love engines with minimal exhaust baffling. I love modified engines. I grew up with fitters and turners and they modified the engines of their cars and we loved driving fast. I love driving fast and one of the greatest joys was living and working in the Northern Territory when the Stuart Highway was an open road and I could drive the 1000 km from Darwin to Tennant Creek in less than six hours. My favourite car was my 1978 CL Chysler Regal Le Baron with a 265 cubic inch hemi six which breathed through a Holley 350 twin twin barrel and ran extractors to twin down pipes. After that I owned several V8 Falcons including an XE Fairmont Ghia with a 351 cubic inch Cleveland V8. I now drive a VW diesel because fuel costs so much money but I still dream of a big V8 in front of me with power to the rear wheels. I’ve never caught a bus in Canberra but I do own a bicycle. It’s gathering cobwebs at the moment.

Favourite TV show?  I love everything Star Trek. The premise of Gene Roddenberry to have a better more ethical life exploring the universe really appeals to me. I fantasise about being the captain of a starship. Apart from Star Trek I enjoy The Big Bang Theory, Top Gear, Master Chef, My Kitchen Rules and the Great Australian Bake Off.

Favourite Device?  I have an iPhone 5, an iPad 3, a MacBook Pro and an iMac. I wear a fitbit everywhere and share my stats daily to twitter and Facebook. For food photography I use a Nikon D90 at home and when I’m out a Canon PowerShot G16 because it has a nice f2 aperture and shoots in RAW. I’ve fallen for Adobe Lightroom for post processing.

Can we take a peek at your home screen? 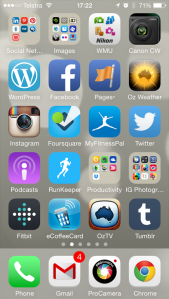 What’s the first thing online you check each morning?  My work e-mail, then personal e-mail, then WordPress, then Instagram, and then Facebook. I’ll also check in to a few places on Foursquare for good measure.

What do you worry about at night?  I try not to worry. When something starts to disturb me I actively think other thoughts.

Most exciting recent news?  Free wi-fi for Canberra town centres. That’s got to be a good thing. Hopefully Belconnen will get it soon.

Ideal Career?  I’m doing what I enjoy now. I’m an adviser in Australian Government and an Honorary VMO in ACT Government.

Recent Book you recommend?  Ship of the line by Diane Carey. It’s a Star Trek novel set over the TOS and TNG eras with some DS9 elements.

Recent online video you laughed at?  I can’t remember but I’m sure it had cats in it doing silly things.

Favourite Food?  My favourite food is congee or jook. It’s comfort food and great for Canberra winters. Very close is my Mum’s wonton soup because it’s communal food. My best wonton meal was a couple of years ago with my parents and brothers all participating.

You can learn more about Gary and his many passions at http://yummylummy.com/ . Gary is on twitter at @garydlum, @Yummy_Lummy and @DrGaryLum and here’s a link to his Instagram account.