Mooseheads at lunchtime on Tight-Arse Tuesdays

I don’t go to Mooseheads after dark. However during the day it looks and feels like a regular pub. On Tuesdays it’s worth going in for the cheap and reasonable pizzas which are large enough to share.

I had the Greek pizza and my mate had Hawaiian pizza. We also had a bottle of beer each and enjoyed sitting at a nice window seat and watched lots of Canberra go by on London Circuit. It’s not a bad way to spend an occasional lunch break. The service is ok (the pizzas took about 15 min). They certainly weren’t the best ever pizzas but it’s hard to beat the value of a large fresh lunchtime pizza for $12. 2 #Canberra Beanies. 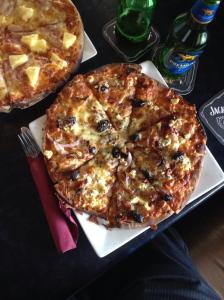